The issue occurs because the process sets its service configuration incorrectly.

A hotfix is available but must be requested from Microsoft using KB 2571181 http://support.microsoft.com/kb/2571181

You may find that svchost.exe holds a lock on a service whilst all the service libraries are being loaded.  This in turn then prevents any other services in the same instance of svchost.exe from starting up until the call to the function has been returned.

An updated version of svchost.exe that will address the issue is available here http://support.microsoft.com/kb/2510636

To resolve these issues you need to delete the contents of the C:\Windows\Prefetch folder and then restart your computer.

The Prefetch folder is just a cache of recently used application executables and will be recreated based upon the applications you use most frequently.  Over time the folder becomes cluttered with rarely used and prefetched applications hence the launch of applications becomes slower.

You may find following the clear down of the Prefetch folder and reboot that the first time you open each application it is still a little slow, ths is because Windows will automatically re-add the application on its first launch to the prefetch folder.  After your first use of the common applications everything should now be much faster and you should find startup times have been reduced.

If your Server is running Windows Server 2008 R2 Service Pack 1 or Windows Small Business Server 2011 Service Pack 1, you utilise RAID and have more than 4GB of memory then you are likely to be affected by this issue.  It seems to impact those servers running memory hungry applications such as Microsoft Exchange, Microsoft SQL Server/Express and Microsoft SharePoint the most.  It can cause the server to operate slowly and/or stop responding for 10-20 seconds to requests.

This issue is related to a limitation in the memory allocation of the storport.sys driver, this file is part of the Microsoft operating system.

All is not lost as Microsoft do provide a solution/fix. The first step is to ensure that your current RAID Controller driver is upto date, the latest version can usually be found on the server manufacturers support site or if you are not sure which update/driver applies to your system then contact the manufacturers technical support by phone or e-mail.

Please note that for HP Smart Array controllers you should be using Driver version 6.28.0.64 (Released 18th Feb 2014) or later for this change to take effect (Enables customers to make use of Microsoft HotFix which enables 64-bit command addressing described by MS KB2468345).

The final step is to create a registry entry under the RAID miniport driver to allow it to address more than 4GB Memory via the storport.sys driver that we have updated.

You will need to browse and locate this registry key: HKEY_LOCAL_MACHINE\SYSTEM\CurrentControlSet\services\<MINIPORT>\Parameters

In place of <MINIPORT> in the example key above you need to enter the name of the Storport miniport driver that is in use on your particular server, i have attached a screenshot of where you can find this information, the example is based upon a HP Smart Array P410i Controller (HpCISSs2) but the principle is the same for most brands of server and RAID controller.

For the HP ProLiant server this Registry key would be: HKEY_LOCAL_MACHINE\SYSTEM\CurrentControlSet\services\HpCISSs2\Parameters 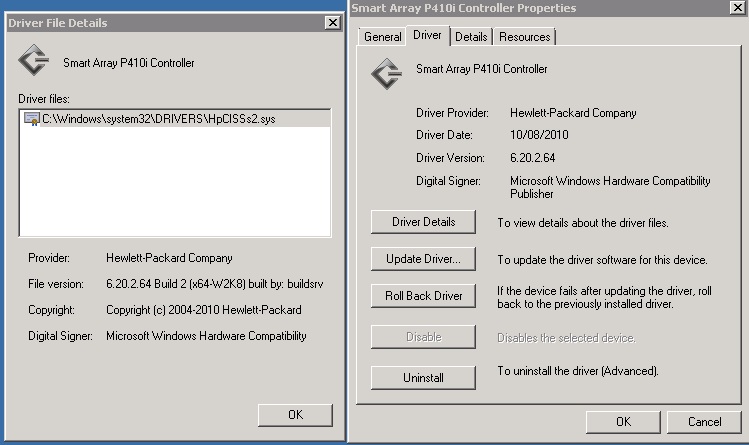 Type Supports64BitAddressing, and then press “Enter”.

Close the Registry Editor and Restart your Server.

Now the RAID miniport driver that uses the Storport.sys driver can access more than 4 GB of physical memory and it should resolve your performance issue.

IT – Software and Hardware Support Resources